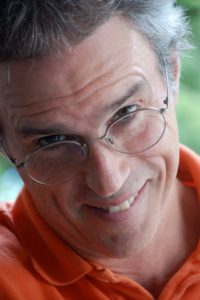 Tom Birdseye grew up in North Carolina and Kentucky, an ardent fan of anything that smacked of sports, crawdads, mud balls, forts built in the woods, secret codes, bicycles without fenders, butter pecan ice cream, and snow. He was, however, decidedly uninterested in writing—or any academic aspect of school, for that matter—never imagining that at the age of thirty-five he would become a published author. And yet after two unrelated college degrees, a year living in Japan, and ten years of teaching experience, that is what happened. “Life, it seems, is full of who’d-a-thought-its.”

Tom’s books have been included in numerous child-voted award master lists and have won several awards. He is the winner of the Evelyn Sibley Lampman Award, given by the Oregon Library Association in recognition of Tom’s significant contribution to children’s literature.

”At times it still amazes me that writing is my profession. It was such a difficult process for me when I was a kid; I can really identify with reluctant writers in school today. Everything seemed to get in the way of my completing stories: from being left-handed to having poor spelling skills, from punctuation woes to (especially) a lack of ideas.

”Fortunately, the right people came along at the right time and helped me see past the hurdles, emphasizing instead the joy of the work and the satisfaction to be had in trying to uncover the important truths that can come out of fiction. Now I carry a small notebook at all times and am always on the lookout for material I can use in a story: ordinary people who would make good characters; the funny, telling, or poignant glimpses of life that are triggered by what I see and hear; and the wonderfully wise things people say at the most unexpected times.

”True, I still labor through my stories, wrestling with the spelling beast and the punctuation monster, writing and rewriting until I glean my best, but the process has become one of pleasure instead of pain. I love doing it, and I love sharing it with others. The boy who couldn’t imagine himself a writer, now can’t imagine himself as anything else.

”What gave me the idea for Storm Mountain? While hiking the Timberline Trail, I started thinking: why haven’t I written about climbing? I love it. The rest of that 42-mile hike was spent exploring story possibilities. By the time I got back to the car, a plot had hatched.”

Tom lives in Corvallis, Oregon, with his family. When not writing or in classrooms talking with children and teachers about the writing process, he enjoys mountain climbing, hiking, skiing, canoeing, camping, mountain biking, music, jogging, and reading.

For more on Tom Birdseye, visit him online at www.tombirdseye.com.

Check out the book trailer!