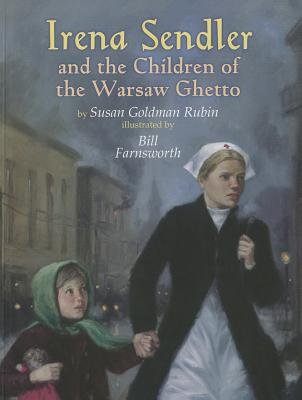 Irena Sendler and the Children of the Warsaw Ghetto

Irena Sendler and the Children of the Warsaw Ghetto is back in print!

Irena Sendler was a diminutive Polish social worker who helped spirit more than four hundred children out of the Warsaw Ghetto during World War II.

Using toolboxes, ambulances, and other ingenious measures, Irena Sendler defied the Nazis and risked her own life by saving and then hiding Jewish children. Her secret list of the children’s real identities was kept safe, buried in two jars under a tree in war-torn Warsaw. An inspiring story of courage and compassion, this biography includes a list of resources, source notes, and an index.

IRENA SENDLER AND THE CHILDREN OF THE WARSAW GHETTO

★“Arresting oil paintings pair with vivid prose to tell the story of a Polish social worker who concealed Jewish children from the Nazis . . . a haunting and unflinching portrait of human valiance.”
—Publishers Weekly, starred review

★“A moving tribute to a courageous woman.”
―Booklist, starred review