GLOW: Galley Love of the Week Giveaway brought to you by Shelf Awareness.

Presented on Mondays, GLOW selects books that have not yet been discovered by booksellers and librarians, identifying the ones that will be important hand-selling titles in a future season.

Be among the first to read Jennifer Ziegler’s middle grade novel, WORSER, a Shelf Awareness Galley Love of the Week.

William Wyatt Orser, a socially awkward middle schooler, is a wordsmith who, much to his annoyance, acquired the ironically ungrammatical nickname of “Worser” so long ago that few people at school know to call him anything else.

Worser grew up with his mom, a professor of rhetoric and an introvert just like him, in a comfortable routine that involved reading aloud in the evenings, criticizing the grammar of others, ignoring the shabby mess of their house, and suffering the bare minimum of social interactions with others. But recently all that has changed. His mom had a stroke that left her nonverbal, and his Aunt Iris has moved in with her cats, art projects, loud music, and even louder clothes. Home for Worser is no longer a refuge from the unsympathetic world at school that it has been all his life.

Feeling lost, lonely, and overwhelmed, Worser searches for a new sanctuary and ends up finding the Literary Club—a group of kids from school who share his love of words and meet in a used bookstore—something he never dreamed existed outside of his home. Even more surprising to Worser is that the key to making friends is sharing the thing he holds dearest: his Masterwork, the epic word notebook that he has been adding entries to for years.

The binder was full— perhaps a bit too full, which contributed to the strain on the cover. Not counting the 17 empty pages in the back, there were 321 pages of writing— all lists of important observations Worser had made over the past three and a half years. Observations about words.

Jennifer Ziegler is an author of books for young adults and middle graders, including How Not to Be Popular, Revenge of the Flower Girls, and Revenge of the Teacher’s Pets. She is on the faculty of Vermont College of Fine Arts’ MFA program on Writing for Children and Young Adults. Jennifer lives in Austin, Texas with her husband, author Chris Barton. Visit her at jenniferziegler.com. 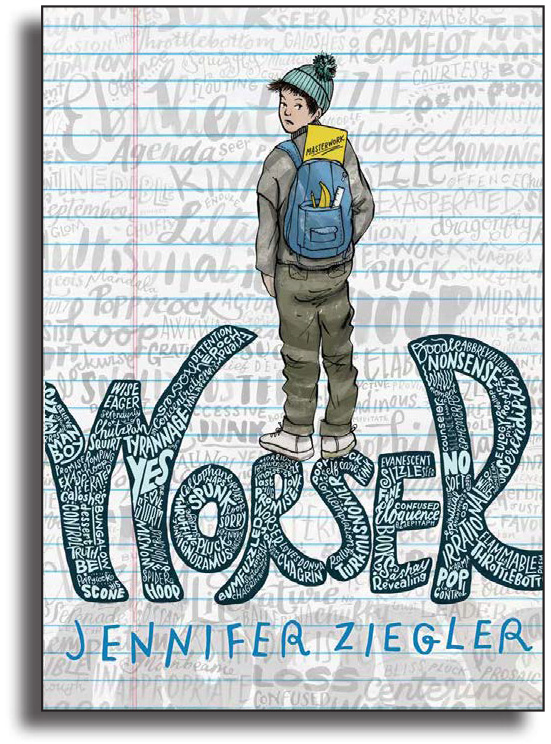 Worser
By Jennifer Ziegler
Margaret Ferguson Books • Holiday House
On Sale: March 15, 2022
This promotion has ended. Thank you for your interest!