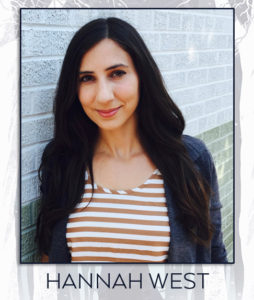 Hi Hannah! First I want to say welcome to Two Chicks on Books! KINGDOM OF ASH & BRIARS sounds absolutely fantastic and I can’t wait to read it! And I am so happy that you could stop by for a visit!
Thanks so much for having me!
For the readers: can you tell us a little bit about KINGDOM OF ASH & BRIARS and the characters?
It’s essentially the story of the fairy godmother from Sleeping Beauty and Cinderella: one young woman named Bristal who discovers she’s an immortal creature called an elicromancer. Her specific gift is shapeshifting. She trains with two other elicromancers, Brack and Tamarice, until the latter turns down a dark path and threatens to bring war down on the realm. Bristal attempts to unite the mortal kingdoms of Nissera as they face this threat, a tasks that involves taking on various disguises to manipulate the political scene. She plays fairy godmother to the two cursed princesses and poses as a male soldier in Prince Anthony’s contingent of thieves-turned-soldiers until she finally has to muster the courage to show her true form and fight for the people that she loves.
Is this a standalone or a series? And if it’s a series do you have a title for book two yet? And if it’s a standalone what are you working on next?
Right now I’m finishing up a WIP that’s completely different—a southern gothic/paranormal based in a fictional East Texas town. But every day I’m getting more and more ideas for a companion novel for KINGDOM OF ASH AND BRIARS and I can’t wait to get a chance to start on it. I have a title but I’ve learned those can change throughout the process. I think this one will stick but I’ll wait to put it out there just in case!
Were any of the characters in the book inspired by people from your real life?
This is such an interesting question and I have such an uninteresting answer: not really. I’m sure some characters have things in common with people in my life but it’s certainly not intentional.
Who was your favorite character to write? What about your least favorite?
Oh gosh! That’s hard. Well, let’s exclude Bristal because writing her was the same as writing the book – which was equal parts fun and arduous. I loved writing Tamarice, because behind every villain there’s a story of grief and loss. We catch her just at a transitional point where she’s finally morphing from harmed to harmful. But while that was an interesting experience, Anthony was my favorite because I love the way the layers of his passion and nobility unfold as tensions heighten.
What is your favorite passage/scene in KINGDOM OF ASH & BRIARS?
There’s a part about ⅔ in that a classic fairy tale moment is woven into the political/approaching war story and it just feels like breath of fresh air. Then only a chapter later there’s a dark crisis that leads to Bristal risking her life for someone she loves and realizing the breadth of that love. For some reason that sequence of events – the sparkly fairy tale moment followed by this grim encounter where things start spinning out of control – felt like everything I imagined when I started dreaming up this story. 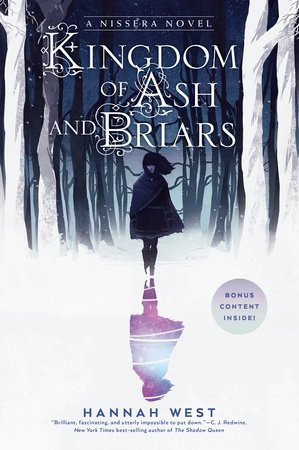 <img
What kind of research did you have to do for the story?
Research is the bane of my existence. That’s why I write fantasy – I would rather make up my own world and cultures than screw up the details of real ones. That being said, I did do a little research about plants and foods that would be indigenous to a western European-esque area and a little here and there related to medieval clothes and weapons. My WIP is requiring a lot more research so I’m warming to it, but you probably won’t find me writing historical novels in the future. Unless I team up with someone who loves research.
Who is your ultimate book boyfriend?
Gale Hawthorne!!!!
What inspired you to write YA?
I’ve been writing stories consistently since I was about 10, most of them relating to magic and teenagers with magic falling in love. I loved Ella Enchanted and Robin McKinley, which led to writing a bunch of fractured fairy tales and fantasy. I will say that the emergence of popular female-driven paranormal YA like Twilight in my late teens helped me gather my love of reading and writing and language into an actual aspiration. It made me realize I could do it!

What are you reading right now? Or what do you have on your TBR that you’re dying to read?
I’m finishing up THE WRATH AND THE DAWN by Renée Ahdieh and then I’m planning to read SOME KIND OF HAPPINESS by Claire Legrand and then SHADOW AND BONE by Leigh Bardugo, which for some reason I haven’t read yet? I have no idea why.

What Hogwarts House would the Sorting Hat place you in?
Gryffindor. Some people in my life try to say Ravenclaw based on the fact that I love to read and write, but that’s not equivalent to being clever and deeply caring about academic success. Gryffindor and don’t try to argue!

Twitter or Facebook?
Twitter
Favorite Superhero?
I’m not a huge superhero person. I watch most of the movies but there’s often an undercurrent of cheesiness that I can’t get past! I’m sure I’ll love the new Wonder Woman movie though, so let’s just say her.
Favorite TV show?
Just one? Game of Thrones, Parks and Rec, Penny Dreadful, Silicon Valley, Orange Is the New Black, Outlander…
Sweet or Salty?
Sweet
Any Phobias?
I’m about to contradict my Gryffindor status. I’m deeply afraid of public speaking of any kind, heights, natural disasters, large crowds (especially when there’s not a clear exit), and gross bodily harm. Most of those things have induced an actual panic attack for me at some point.
Song you can’t get enough of right now?
“Wood” by Rostam and “Closer” by the Chainsmokers ft Halsey
Spring Movie you’re most looking forward to?
Beauty and the Beast!

Thanks so much Hannah for answering my questions! I can’t wait for everyone to read KINGDOM OF ASH & BRIARS!