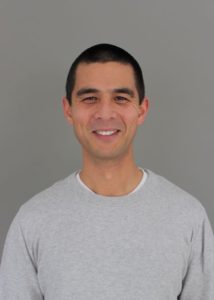 Holiday House sat down with award-winning author and illustrator Jason Chin to discuss his new book, Watercress by Andrea Wang.

Your family moved a lot when you were a child. How did those experiences shape your work?

I lived in three different cities before my second grade year, when my family settled down in a rural town in New Hampshire. It was during this time that I started to identify as an artist, or at least that art was my “thing.” Because of all the moves, I had a rotating cast of friends and I wonder if I gravitated toward art because it was something that was always there. That’s just speculation, though. I don’t want to make it sound like I had a bad childhood or anything.

Tell us about the use of Chinese brushstrokes in Watercress. What type of research did you do for this? 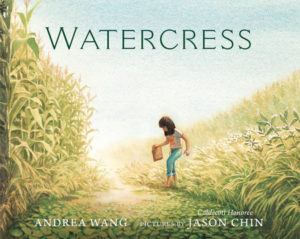 I studied Chinese calligraphy and painting for a brief period in college, and many of the things I learned about the approach of Chinese artists influenced my approach to art. When I was making Watercress, I pulled out my old books of Chinese painting to study, and although there aren’t any brushstrokes or techniques that are specifically Chinese in Watercress, I did try to incorporate some aesthetic elements from Chinese painting.

Chinese painters use soft edges and empty (or nearly empty) space to convey expansive distance, and I’ve always felt this gives the paintings a dreamlike quality. I incorporated many soft washes and empty spaces in my paintings to represent the theme of memory that runs throughout the story.

Chinese paintings have a strong focus on linear brushwork, and the expressiveness of their strokes is a big part of their appeal for me. My paintings are not linear, but for this book I looked for opportunities to make the brush strokes visible. I think this is most apparent in the dry-brush marks in the vegetation. Many of the marks were made with Chinese brushes, because their strokes have more personality to my eye.

You illustrate both fiction and nonfiction. Do you have a preference?

I like doing both. I’m much more comfortable with nonfiction, because I’ve done more of it. But I liked having the freedom to explore story and character more with this book. With nonfiction, it’s all about representing the subject realistically and trying to also convey its inner spirit. With Watercress it was reversed: the inner spirit of each character was most important and the accuracy of representation could be secondary. For example, I could be looser and more expressive with the brushwork.

How is the process different when you illustrate another author’s story versus your own?

With another author’s story I have to find a way to get into it, to make it my own. Sometimes I put people that I know in the book. This was the case with Nine Months—the characters are based on my brother and his family. Doing so helped me to know the characters and to understand their “inner spirit.”

In the case of Watercress, one of the ways I got into the story was through the study of Chinese history. While I have direct experience with Chinese American families (most notably my own!), I have no direct experience with people who lived in China during the 1950s. So I had to learn about that period in Chinese history, and it was particularly helpful to read the testimonies of people who lived through the Great Famine.

What advice would you give young artists who are thinking about becoming an illustrator?

I would say that young artists should find ways to enjoy the process of making art. Developing a skill, whether its art or another skill, takes practice, and it’s much easier to practice when you are enjoying it. Most kids that have an interest in art enjoy it most of the time, but all artists get frustrated at some point. Sometimes people get so frustrated that they stop making art altogether. When I get frustrated I have to find a way to get back to enjoying the process. Often I do life drawings in my sketchbook. It’s something I really enjoy, it doesn’t require a lot of decision making (I just draw what I see), and I can do it without judgment (it’s just for me and no one else will see it).

Jason Chin is a celebrated author and illustrator of many children’s books, including three for Holiday House: Your Place in the Universe, Miranda Paul’s Nine Months: Before a Baby is Born, a Boston Globe–Horn Book Honor Book,  and Andrea Wang’s Watercress. His book Grand Canyon was awarded a Caldecott Honor, a Sibert Honor, and the NCTE Orbis Pictus Award. His other acclaimed nonfiction titles—Redwoods, Coral Reefs, Island: A Story of the Galápagos, and Gravity—have received numerous starred reviews and other accolades. He is also the illustrator of Stephanie Parsley Ledyard’s debut title, Pie Is for Sharing, and Miranda Paul’s Water Is Water. Jason lives in Vermont with his wife and children.