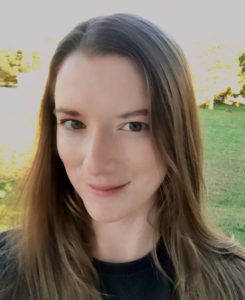 Holiday House sat down with author Jodi Meadows to discuss Nightrender, her latest YA fantasy.

When one kingdom begins developing a machine that can move malice—thereby breaking the ancient Winterfast Accords—the rulers of the other two kingdoms decide to form an alliance by marrying their heirs—and march on their mutual enemies. Meanwhile, an Incursion is looming, and demonic rancor threatens all three kingdoms. An immortal champion must decide whether she will protect the people who betrayed her.

Some of Nightrender began in 2006, with a story snippet about a young woman awakening in a tomb, a king and a prince with unknown motives, and the weighty expectation that she was to perform some kind of task for them. For years I came back to that image, wondering about it, always searching for the right story to bring it to life.

Another piece of Nightrender came from my fascination with the Ghost Fence in the video game Morrowind. In that game, the fence held back all manner of blighted creatures. The landscape was red, inhospitable, and deadly. In Nightrender, the Malstop is a spherical barrier that traps the dark energy of the Malice—and the demonic creatures that lurk within.

Finally, I knew I wanted to write a story about a hero, a champion of the people, but aside from a few random pieces of world and character, I didn’t have much to go on. No problem for her to overcome, internally or externally. I didn’t have a sense of the people who lived in this world. I didn’t even know how many points of view I should have! So I spent weeks simply brainstorming different scenarios for this immortal guardian, figuring out what would be interesting enough to keep me working on the book for multiple years.

I hope the readers of Nightrender feel seen—the ones my age, who grew up hearing about acid rain, global warming, and the hole in the ozone layer, and the kids today, who are seeing the climate crisis intensify before their eyes, with storms and fires and droughts growing worse every year.

But I hope they feel empowered, too, to take charge, to push for change, and to fight for a better future.

The Blue Sword by Robin McKinley

Winter of Fire by Sherryl Jordan

In a lot of the books I read early on, the magical elements were explained away by the end of the story. The ghostly voice was just wind keening across an opening in the dark cave. The ghost cat was a shy white cat.

But when I read Wait Till Helen Comes, the ghost was real, and she was dangerous. When I picked up Winter of Fire, the whole world was different—fantastical and dark. Reading those books led me to other fantasy books, like Wild Magic and The Blue Sword, with different kingdoms and worlds, magic and dragons.

I have two cats, Hush and Hildy, and I love them equally.

Growing up, I had a multitude of cats, a few dogs, and—in my teen years—two horses. My horse was named Ivan, and he looked like a giant Dalmatian. He bit me a couple of times. Once, I bit him back. (He tasted like dirt.) He learned his lesson after that.

This question is hard. 🙁

One where bad things aren’t always happening. And one where I, a peasant, don’t have a terribly difficult life. This book probably doesn’t exist. No tension.

If you could have a magical talent (e.g., becoming invisible, or the ability to fly), what would it be?

I wouldn’t mind the ability to speak with animals. There are a thousand ways that could go wrong, of course, but if I could explain “fall back” and “spring forward” to my cats and thatI’m not just withholding their wet food for my own amusement, that would be nice.

Spinach. I have learned that spinach from a can is not the only way spinach comes. A person can also get spinach fresh, not soggy! And it is delicious! Who knew??

What is your favorite food now?

No. I have always loved chocolate. Although now I prefer expensive chocolate. This is called character development.

Jodi Meadows wants to be a ferret when she grows up and she has no self-control when it comes to yarn, ink, or outer space. Still, she manages to write books. She is the author of the Incarnate Trilogy, the Orphan Queen Duology, the Fallen Isles Trilogy (HarperCollins/Katherine Tegen), and the Nightrender duology (Holiday House). She is also a co-author of New York Times bestsellers My Lady Jane, My Plain Jane, and other books in the Lady Janies series (HarperTeen). She lives in rural Virginia.