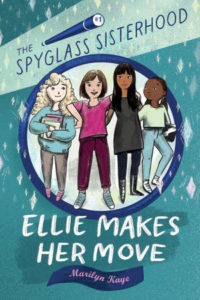 Please tell us about your new series, The Spyglass Sisterhood.

In The Spyglass Sisterhood, four twelve-year-old girls, each of whom is a loner for a different reason, come together around an unusual spyglass that leads them into unusual situations.

You’ve written more than a hundred books for young readers, including several successful series. How has writing for middle-graders changed over the years?

I think that middle-graders today are more sophisticated than they were thirty years ago, when I wrote the Camp Sunnyside Friends series. They are more aware of the world beyond their family, school, and neighborhood, and this means I can write about more mature subjects. On the other hand, many of the feelings, hopes, and fears of young people remain the same, so I can still address those issues in much the same way.

When you start on a new series, what kind of research do you do for your characters?

If I have a character from a culture that I’m not personally familiar with, I’ll do a lot of reading about their culture, beliefs, traditions, and any particular concerns that this character might have. But for the most part, my characters spring from my imagination.

You have written in so many different genres and formats— romance, science fiction/supernatural, fantasy. Do you have a favorite?

No, I like them all! Whatever genre I’m writing in, I want to make my characters as realistic as possible, so readers can identify with them even if the characters live in an unfamiliar world or have unusual talents and interests.

You grew up in Atlanta, taught children’s literature for many years in New York City, and now you live in Paris. How have these experiences shaped your writing style?

All experiences contribute to a writer’s style. I like to think that living in different places with different cultures has opened my mind and expanded my imagination.

When did you know you would be an author?

For as long as I can remember, I loved stories. I learned to read very early, before I started school, because I didn’t want to have to wait for someone to find time to read to me! I’ve been telling stories from a very early age, and as soon as I learned to write I began putting them down on paper and sometimes sharing them with family, teachers, and friends. At various times in my young life, I had other ambitions—to be a ballerina, or an astronaut, or a movie star. But in the back of my mind, I knew I’d always be a writer.

Marilyn Kaye is the author of many books for young readers, including the Gifted series and Replica series. Born in New Britain, Connecticut, Marilyn grew up in Atlanta. She earned a master’s degree in library science at Emory University in Atlanta and taught children’s literature at St. John’s University in New York City for more than twenty years. She lives in Paris.