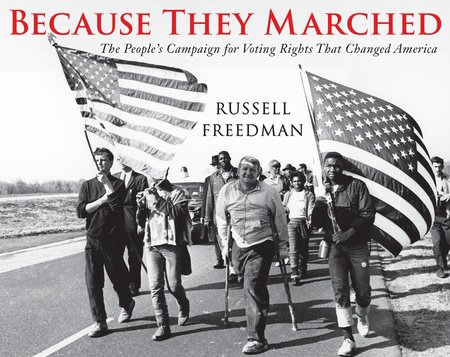 The People's Campaign for Voting Rights that Changed America

For the 50th anniversary of the march for voting rights from Selma to Montgomery, Alabama, Newbery Medalist Russell Freedman has written a riveting account of this pivotal event in the history of civil rights.

In the early 1960s, tensions in the segregated South intensified. Tired of reprisals for attempting to register to vote, Selma’s black community began to protest. The struggle received nationwide attention when Dr. Martin Luther King, Jr. led a voting rights march in January, 1965, and was attacked by a segregationist. In February, the shooting of an unarmed demonstrator by an Alabama state trooper inspired a march from Selma to the state capital of Montgomery. The march got off to a horrific start on March 7 as law officers attacked peaceful demonstrators. Broadcast throughout the world, the violence attracted widespread outrage and spurred demonstrators to complete the march at any cost. On March 25, after several setbacks, protesters arrived at the end of the fifty-four-mile march to a cheering crowd of 25,000 supporters.

Illustrated with more than forty photographs, this is an essential chronicle of events every American should know. Includes timeline, source notes, photo credits, bibliography, index.

The Movie Selma and Because They Marched: A Comparison

BECAUSE THEY MARCHED: The People’s Campaign for Voting Rights That Changed America

Educator’s Guide featuring questions for classroom discussion aligned with CCSS, connections to the movie Selma and suggestions for further exploration.

★ “One of the most decorated nonfiction writers in the field brings his style to a well-told story of the struggle for voting rights in the American South. . . . Richly illustrated, this deserves a place alongside other important depictions of this story.”
—Kirkus Reviews, Starred Review

★ “Freedman writes with great immediacy, weaving pertinent first-person accounts into a beautifully written narrative that is moving as well as informative. . . . this handsome volume offers a vivid account of a pivotal moment in American history.”
—Booklist, Starred Review

★ “The book’s eight chapters pull readers into the decades-long struggle via clear, concise storytelling and myriad quotes from participants, many of them young at the time. . . . The momentum-building narrative and often-graphic b&w photos captivate as they recount demonstrations big and small.”
—Publishers Weekly, Starred Review

“A first choice for librarians looking for titles on the Civil Rights Movement.”
—School Library Journal