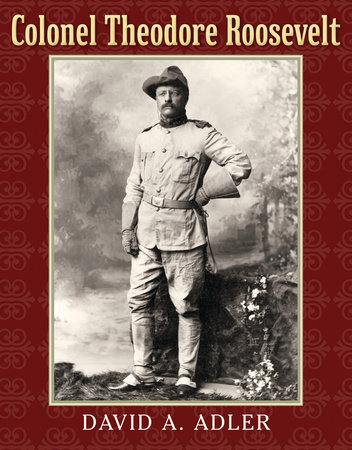 Master biographer David A. Adler has created a meticulously researched portrayal of the 26th president of the United States.

Theodore Roosevelt seemed an unlikely head of state to many. Some called him the cowboy president because of his experiences as a Dakota Territory rancher, adventurer, and head of Rough Rider Regiment in the Spanish-American War. Yet as president, he was anything but a hayseed. He increased the country’s stature in the international sphere, built the Panama canal, and won the Nobel Peace Prize. A tireless crusader for causes he held dear, he was known as the “trust buster” for breaking up powerful monopolies and was one of the most significant conservation activists of his time.

This handsome portrait of perhaps our most colorful and energetic president includes over fifty photographs and pictures, copies of historical documents, and a time line.

“An absorbing portrait of an iconic president known as much for his adventurous nature as his robust political life. . . . A valuable addition to the presidential-biography shelf.”
—Kirkus Reviews

“Well researched and clearly written, Adler’s account offers a good introduction to the man and his times.”
—Booklist