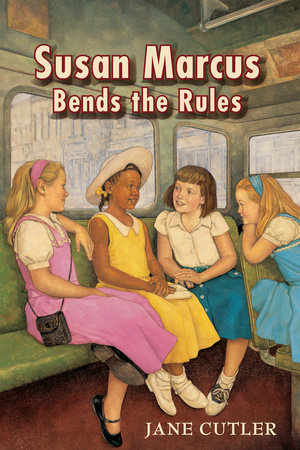 As a New York-to-Missouri transplant in 1943, ten-year-old Susan Marcus discovers a world of prejudice right in her own backyard and takes a small but courageous stand toward equality.

You wouldn’t even know there was a war on, thinks Susan Marcus as she surveys her new neighborhood in Clayton, Missouri. There are no air raid wardens, no black-out curtains. It’s so different from her old home in New York City, no tall apartment buildings, no bustling city streets. Worst of all, for the first time in her life, ten-year-old Susan encounters prejudice—against New Yorkers, Jews, blacks, and the Japanese. She must be circumspect about her friendship with Loretta (the daughter of the black janitor), for Jim Crow laws still exist in Missouri. Outraged, Susan decides to strike a blow against them. She’s not going to break the rules exactly, she’s just going to bend them.

“Children will cheer for Susan’s courage in defying the injustice in her world.”
—School Library Journal