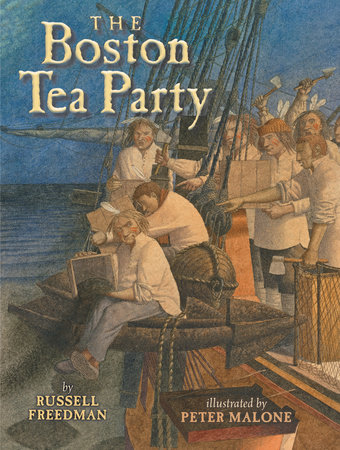 More than any other event the Boston Tea Party of 1773 has come to stand for the determination of American colonists to control their own destinies.

From the arrival of the ships full of controversial taxed tea in Boston Harbor through the explosive protest meetings at the Old South Church to the defiant act of dumping 226 chests of fine tea into the harbor on December 16, Russell Freedman captures this exciting story in vivid prose. In lush, intricately detailed watercolor paintings, Peter Malone artfully depicts the colonial era and the charged atmosphere of Boston during these pivotal developments that ushered in the Revolutionary War.

Source notes, a bibliography, a time line, an afterward, a note about tea, a historical map, and an index are included in this opulently designed volume.

Russell Freedman‘s awards and honors include a Newbery Medal, three Newbery Honors, and the Laura Ingalls Wilder Award. In 2007, he received the National Humanities Medal. He lives in New York City.

Peter Malone‘s fine artist prints are widely collected. His illustrations have appeared in The New Yorker and on British Royal Mail stamps as well as in many books for children. He lives in the west of England.

“As always, Freedman demonstrates his skill at telling the story behind history, weaving a lively narrative out of the details and voices that shaped one episode of  history. The volume has been lovingly designed, and Malone’s memorable watercolor illustrations are be autifully wrought, adding much to the telling.”
— Kirkus Reviews (starred review)