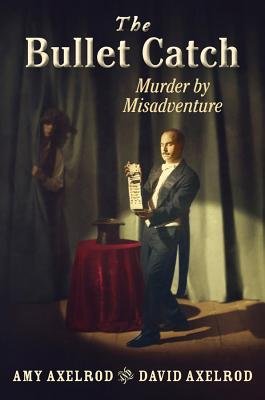 This spellbinding novel chronicles the coming-of-age of a resourceful young man who must refashion his destiny amid murder and misadventure in the golden age of magic.

When the orphanage he called home burns to the ground, 14-year-old Leo and his three friends turn to larceny to survive. Leo proves to be a most gifted pickpocket, but when he is cruelly betrayed by his gang, he abandons the life of crime to become the apprentice of a has-been magician named Barzini.

With help from the great Harry Houdini, Barzini is staging a comeback, complete with an improved variation on the bullet catch trick made famous by his arch enemy, Chung Ling Soo. He wants more than to just outshine his old rival; he is out for revenge. As Leo struggles to escape his dangerous past, he must confront the possibility that his new mentor may be even more dangerous.

BULLET CATCH, THE: Murder by Misadventure

“The mother-and-son writing team brings the setting to life, including such luminaries of the time as Houdini and Sir Arthur Conan Doyle as minor characters for verisimilitude. The inside knowledge of magic adds an exotic touch. An absorbing mystery enhanced by its intriguing backdrop.”
—Kirkus Reviews

“Beyond the entertaining smoke and mirrors, the novel offers substantive food for thought regarding loyalty, trust, forgiveness, and redemption.”
—Publishers Weekly