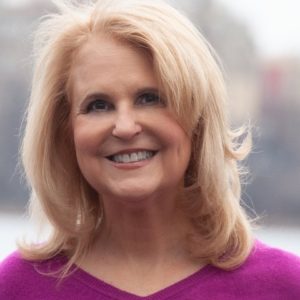 Holiday House sat down with Nancy Krulik to talk about The Great Mathemachicken 1: Hide and Go Beak, the first title in her new chapter book series.

The Great Mathemachicken book series tells the story of a young chick who knows there’s more out there in the world beyond her little coop, and she wants to learn about it. Chirpy’s just like a lot of smart, curious kids who have a love of math and science, she just happens to have feathers and a beak. When Chirpy discovers that what she’s learned in school will help with problems faced by the chicks, hens, and roosters back at the coop, she realizes that math and science are her superpowers—and earns herself the superhero name The Great Mathemachicken!

I am the daughter of a math education professor who always taught me (and the teachers in his college classes) that the way to get kids to learn to love and appreciate math is to make it fun and exciting. That’s why Chirpy and her fellow coop-mates are funny, and the stories are often filled with page-turning adventure.

I hope kids are inspired to use the STEM skills they learn in school in their real lives, and that they develop the same curiosity Chirpy feels about the world around them. I hope to put an end to that “When am I ever going to use math in real life?” nonsense once and for all.

I loved mysteries like the Nancy Drew series; the All-of-a-Kind Family series; Are You There God? It’s Me, Margaret.; the Five Little Peppers series; The Little Ballerina . . . it’s kind of hard to pick just one.

I loved reading late at night under the covers with a flashlight after bedtime. I’m sure my parents knew, but they never, ever said a word about it. That habit was not a great thing when it followed me to overnight camp, and I decided to read Helter Skelter during a thunderstorm many years later.

I had parakeets as a child—two green ones named King Parry and King Parry 2. My third bird was blue and named Budgie (for Budgerigar). I’m much more creative with names now. When I grew up, my kids wanted a dog, so we adopted a spaniel mix named Pepper, who was the model for Katie Kazoo’s dog in my Katie Kazoo, Switcheroo book series. We later adopted a beagle mix named Josie, who was the model for Sparky, the main character in my Magic Bone series. How do you pick a favorite? That’s like asking a mom who her favorite kid is.

Scott Fitzgerald is my absolute favorite. I’m also a huge fan of Ernest Hemingway. I read—and reread—their novels and short stories over and over and over. As a kid, I loved Dr. Seuss. I will still pull out Yertle the Turtle and read it. What an amazing book of stories!

This question isn’t applicable, as I buy any book I want to read and always make the time to read it!

Marjorie Morningstar was a book my mother loved as a teen and she gave it to me. We both adored it, but I found the ending (which showed how the main character’s life eventually ended up) depressing, and she thought it was wonderful. It was the first time I realized the generation gap was a real thing, and that the women’s movement had given me opportunities my mom had never even dreamed of.

I have always loved the adventurous female characters who have curiosity about other places and people. Pippi Longstocking and Alice in Wonderland both immediately come to mind.

Maybe Hemingway’s short story collection A Moveable Feast. I’ve always been fascinated by the 1920s in Paris—the literature, art, and music from that era was groundbreaking. And the idea of listening to so many brilliant people conversing in the salons seems like it would be incredibly mind opening.

If you could have a magical talent (i.e., becoming invisible or the ability to fly), what would it be?

I would love to be able to read people’s minds. As an author, I always know what my characters are thinking; it would be so awesome to know that in real life as well. Talk about giving yourself a heads-up before you enter new situations, right? Although I suppose I might be a bit disappointed once in a while, too.

Lately I have been on an acai bowl kick—especially with extra granola and lots of fruit.

Absolutely. I’m vegan now. When I was a kid, I probably would have said my favorite food was fried chicken or the hot dogs you get at a baseball game.

In high school I was obsessed with Woodward and Bernstein. Their ability to reveal corruption in government was the reason I majored in investigative reporting in college. Gloria Steinem has also been one of my heroes, and she was a reporter as well as a feminist icon. I never actually became a serious reporter; instead I now write about chickens and ducks that go to school. Life takes you crazy places. Honestly, my heroes these days are teachers (I’m the wife, daughter, granddaughter, and mother of teachers) because they are the ones who shape young minds and change the world.