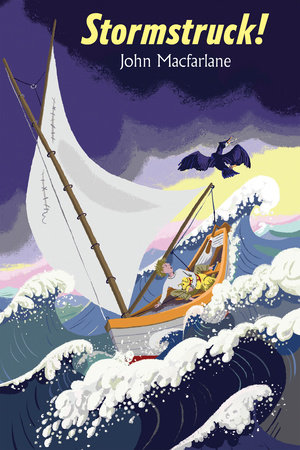 This gripping adventure-at-sea skillfully blends a suspenseful survival story, a heart-wrenching boy-and-his-dog tale and the sensitive treatment of a youngster coming to terms with the death of a family member.

When twelve-year-old Sam overhears his parents talking about their elderly and infirm Labrador retriever, Pogo, he’s convinced they plan to have the dog put down. To save Pogo, Sam sets sail with the dog in a fourteen foot boat for an island off the coast of Maine. The elements conspire against them as they move from one danger to another: fog, near decapitation by a tugboat cable, a storm at sea, a lurking shark and the loss of their boat. Sam summons courage and ingenuity to meet each new challenge, helped along the way by Pogo’s loyalty, a one-eyed cormorant, a retired ornithologist, and a lifetime of good nautical advice from his older brother. As he battles nature’s fury, Sam is finally able to come to terms with what he has truly been running from: his brother’s death in Afghanistan.