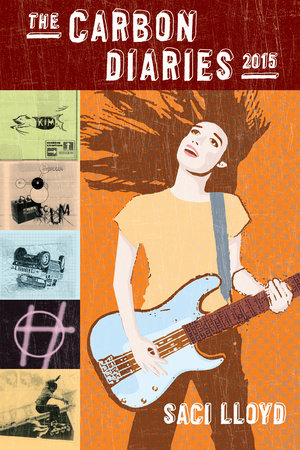 In this riveting sequel to the hit eco-thriller The Carbon Diaries 2015, Laura Brown, now a college student in London, chronicles the struggle England faces as the government tightens its grip on carbon rations.

Laura is juggling two love interests, and her eco-punk band, the dirty angels, keeps landing gigs, so life is good . . . until a crackdown on rioting students forces her to flee the city. Then, on the band’s European tour, Laura finds herself at the center of a series of dangerous events. The angels have always sung about fighting corruption. Is it time for Laura to join the underground resistance movement and actually practice what the dirty angels preaches?

As perceptive and compulsively readable as its prequel, this book raises provacative moral questions for today’s young adults.

This book is printed on environmentally responsible paper, FSC Natures B19, 30% post-consumer waste. In addition, the printing process and ink reduce VOC (Volatile Organic Compounds) emissions and use less energy. The paper meets the standards of the Forest Stewardship Council. FSC is widely regarded as the best practice in forest management, ensuring the highest protections for forests and indigenous peoples.

A Readers’ Guide to accompany the riveting ecothriller – with discussion questions and links to explore further and get involved.

Questions for discussion of both titles, plus links to further reading.

“This green-themed first novel by Londoner Saci Lloyd is a breath of unpolluted air. The first person narrative gives the British teenage view of a future carbon rationing world all told with wonderful humor and sarcasm. The printed e-mails from Larua’s American cousin and the other drawings and graphics sprinkled through the book are cleverly used to tell parts of the story. I highly recommend for all libraries.”

The Carbon Diaries • All Titles